All Good Things... Must Come From Somewhere

You do care about me! I knew you were cool.

So, the first step once you’ve picked a costume is research. Massive amounts of research.1 If you don’t, you might miss a vital detail. For instance, if you decided to cosplay the 10th Doctor from Doctor Who, you’d need to make sure you are aware of the color of his pocket welts, which for the record, are orange. And if you don’t have orange pocket welts, WELL, you might as well leave that sonic screwdriver at home, because you, my friend, are not the Doctor! In this instance, I am meeting Wil Wheaton. Even though Star Trek was twenty years ago, I’m sure it has been so completely burned into his brain,2 he might actually remember this costume enough to know if I did it right. And the only person I really care about liking this is Wil. Oh, and me, I care if I like it. Oh and everyone else, they should like it too.

So even though this is a pretty simple jumpsuit, I want to make sure I do it right. So I ask The Google for some pictures. After combing through the stack of headshots and an assortment of mildly-related images, I finally find a useful reference for Wesley: 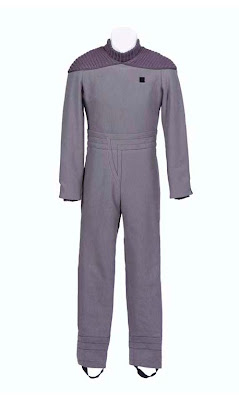 Official picture of listing at Christie’s Auction House.I should have just spend the two grand and saved myself the headache.(Yes, I know, it wouldn’t fit me. Shut up.)

So you probably see a grey jumpsuit.

Let me show you what I saw: 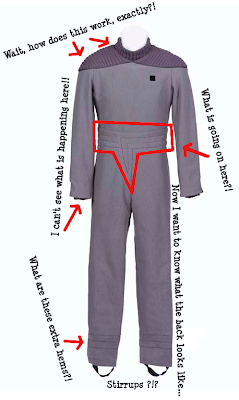 Through the Eyes of a Costumer...is the name of my David Bowie coverband.

Wesley, what is up with your pants?! Why is there a giant arrow pointing to your crotch? That’s not a fly, I know what a fly looks like, and that is not a fly. That is the most unimportant and incredibly awkward stitching that I have ever seen. Seriously, what is the point of that stitching!?!

Unfortunately, there’s not an accompanying back shot. And I need to see the back now. If this is what the front is like, what in the world does the back have in store for me?! We’re going to need to crack open the DVDs for this. Season two is where he gets the jumpsuit, so if we just skip through a few episodes we might find something useful. Ok Wes, stop driving the ship and turn around so I can see your butt.... I mean waistband. 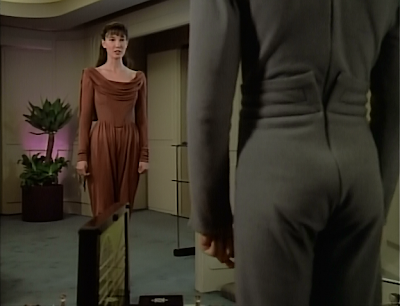 And I though the front was confusing...

…This is worse that I imagined. What are those flaps?? Your Mother lets you out of your room in that thing? Oh wait, she wasn’t around? Did someone tell you this spacesuit was cool? It’s not cool. Bow-ties are cool. This is the weirdest space suit ever. Seriously, this was supposed to be easy! What happened to "just a grey jumpsuit"? I’ve now got a suit with a not-a-fly and the most confusing looking waistband of all time. Not to mention all the inexplicable sweater knit, that is apparently in the cuffs as well as the collar and shoulders.

Don’t Panic. This probably isn’t as hard as it looks. Surely, I’m not the first one to make a highly accurate Acting Ensign Wesley Crusher costume. Someone has always done the hard work for you when you are doing a costume this old. Or not. Internet, you fail me.....

Maybe the Star Trek uniform forums have something that might help me. Nope. Apparently, since Wes doesn’t stick out enough as the only child allowed to run around on the bridge, they’ve got to stuff him in the only monochromatic jumpsuit ever designed for Star Fleet. It’s not even close to the other uniforms. No color blocking, none of the same seam lines. I mean, he doesn’t even get a standard com badge! Even his communicator is monochromatic.WHY is EVERYTHING different!?!?

I continue to scour the Internet for any information about the suit. Wil Wheaton blogs a lot and has talked about his time on Star Trek, so maybe he talks about his costumes some. The only story I can find that included mention of his space suit is the story of when he met William Shatner. All I really glean from this is that it’s a very uncomfortable jumpsuit, and he and all the main TNG cast members had to wear muscle suits. Well, that explains Wil’s perfectly smoothed torso, and it gives me yet another thing that I probably have to do to make the costume look right.

I’m at the end of my rope here, so in an effort to gain as much information as I can, I even contact the original costume designer for the second season of TNG.3 She actually responds, but refers me to the person who was actually responsible for creating the costume. He never gets back to me. Not that I blame him. I wouldn’t be able to tell anyone much about a project I did twenty-three years ago.4

So I’m back to gathering stills from the DVDs. The additional images aren’t really helping me. If anything, they are adding to my confusion. I have no idea how the top of the waistband is connected, or not connected, to the rest of the suit. I mean, the side seam doesn’t line up. And it moves... 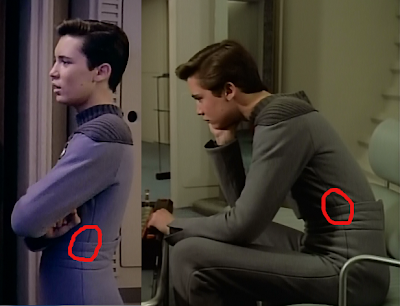 That side seam so doesn’t line up, which means it’s not connected.Which means the top is held on by magic.

I’m starting to think that a spacial anomaly has taken up residence around Wes’s waist. It’s as reasonable an explanation as any. So I just have the waistband connect to the suit on the bottom, leaving the top open like a flap, or pocket. I still have no idea if this is even close to right.

Nepoleon or gangster. You decide.

Meanwhile, I’m also trying to figure out Wesley’s hair. I'm all about accuracy, but I’m not cutting my hair. Especially into whatever that style is. So I’m stuck with a wig. For a short style, this is a terrible option, but it’s the only one I have. So I get a men side part styled wig. Now, your average person would just take this, mousse it into position, and call it good. But I’m a crazy person, so I spend twenty hours ripping out and replacing the hairline with a lacefront, and adding in some more wefts to give it more body. This is to make it look more realistic, or at least more like what Wil’s got glued to his head. Once I make it to Atlanta, I douse it in wig mousse, to give it that shiny, helmet-y look and feel. Unfortunately, despite my best efforts, the awkwardness of a short styled wig gives the wig away within the first two seconds of looking at me, but you can’t say I didn’t try. 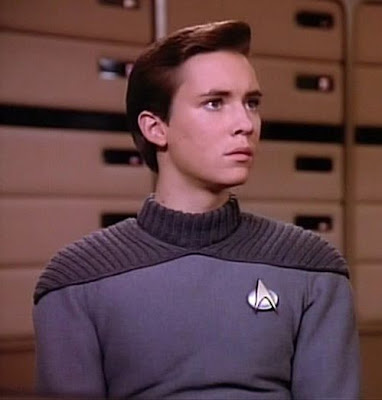 Why am I spending so much time trying to make this look more realistic?I’m pretty sure this hairstyle defies the laws of physics.

To finish off my accessories, I grab some grey ugg-like boots from Ebay. There are really aren’t any good shots of the shoes on Star Trek,5 so I just get something that looks close. The communicator prop from Roddenburry.com is great, but I have to repaint the gold circle with Testor’s silver model paint. Because as I've mentioned before, Everything about this costume is apparenlty unique...6 To finish off my look, I ask my friend to loan me his iPad as a PADD. It’s not the same shape, but that’s about the only difference. That and you can’t use an iPad to drive a space ship. Actually, there’s probably an app for that.


Now that I’ve got the wig, boots and badge, it’s time to finish the suit. This is actually a fairly tight fitting jumpsuit, but I am not boy-shaped. So I need to make a padded under-suit to fool people into thinking I am.7 Also, Wil did wear a muscle suit, so I should probably try and emulate that somewhat. I’ve already got a pretty good chest binder that turns my chest from female to buff-looking male, but I also really need to fill in my waist to try and get rid of my girly hips. After a couple hours with my body suit patterns, some quilting batting and stretch polyester lining, and I’ve got a more boy-shape. Or a boy-that-was-forced-to-wear-a-muscle-suit-shape.

Now that all my base layers are in place, I’m ready for my first mock up. I draft it off of numerous old patterns, and then cut and sew it up quickly and try it on. Even without a zipper, this is very uncomfortable. I can’t believe it, Wil was totally right. This is the most uncomforatble thing I've ever worn. Well, I’m my own costumer, so I’m fixing this. Accuracy, smaccuracy, I don’t need to give Wil sympathy pain for a role he played 20 years ago.8

So work, work, work. Pattern, pattern, pattern. Sew, Sew, Sew. Only 36 hours to go, and I’ve still got to go to work the next day. After a bleary day of coding, I come home on Wednesday and pull an all-nighter. And by the end, Wes is nearly done, and he looks pretty awesome. I even take a break to throw a zipper in my companion cube so I can finally take him to a con.9 Come Thursday morning, I stagger out the door with my four bags full of costumes that probably weigh more than I do. After I finally get some sleep on the plane and make it safely to the hotel, I spend a few more hours sewing up the neckline, leaving just the sleeves and the pants for the next day. Fact: 98% of costumes are completed in hotel rooms. The other 2% are completed by costume gnomes while you sleep.

Continued in Part 2 - Encounter at Dragon*Con

1 Note: This only actually applies if you are a crazy-insane costumer, or if you want the company and respect of crazy-insane costumers.2 Both from the awesomeness and having to answer questions about it for those twenty years.3 You might wonder why I didn’t contact Wil about this. Well, I wanted it to be a surprise, and I couldn’t come up with a way to ask about the suit in detail without tipping him off.4 Twenty three years is over half a career ago for most, and nearly a whole lifetime ago for me.5 Probably cause they couldn’t figure out something futuristic to do to them.6 Maybe they were trying to remind Wesley that he's not a real officer.7 Not that kind of padding...8 I added a dance sleeve that had a build in gusset, and lengthened the torso. A gusset is an extra piece of fabric added to areas, usually under sleeves to allow for more movement, especially in... oh who am I kidding, no one is reading this footnote.9 I made a custom inflatable balloon to put inside the companion cube. I just needed put a zipper in so that I could easily open and close him up in order to inflate and deflate the balloon. Unfortunately, the balloon still has some holes in it, but it held air long enough for me to hang out for a while at Dragon*Con in Chell & Cube cosplay for the first time.