I am a Geeky Mormon Woman.

These three words are not usually used in the same sentence, much less to describe the same person. Though I’m sure I’m not the only one in existence. There have to be at least a dozen of us.

Even in that dozen, we tend to be Geeky in different ways. Most of the Mormon Women Engineers I know spend their nights and weekends in pursuit of different activities. Some do not actually have nights and weekends because their jobs and so stressful.1 Some choose to train for and run marathons. Others put together Mario themed parties for their babies. I spend my nights sewing costumes based on the media I consume. My chosen activities sometimes make me feel unique, even among Geeky Mormon Women. 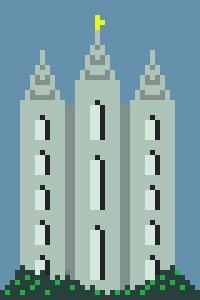 
Being unique is awesome, it makes you singular. Like Chell.2 Or Abish.3 It can also leave you single. This can be a difficult state when one of your cultures has a lot of focus on family, and the other culture doesn’t understand how you can possibly get through your day without coffee.

However, I see harmony where others assume discord.

I intend to explore that harmony between the different things that I am. A Geek. A Mormon. A Woman. I hope to cover a lot of space where these overlap, and prove that there is a presence, where many assume there is a void.

This should be a fun ride.

1 Not a fun place to be, but a lot of us have been there.2 For those of you who are not gamers, Chell is the heroine of Portal 2. She is the only surviving human in the Aperture Science facility and takes down a robot bent on her destruction. It’s a good game, you should play it.3 For those who are not Mormons, Abish is a Lamanite woman in the 1st century BC. She is the sole Christian among the Lamanites until Ammon arrived, and she aided in the conversion of an entire nation. It’s a good story, you should read it.