For years, I forgot about my CTR 1 ring.

Actually stands for “I am a Mormon”

See, I’ve been looking for a way to identify myself as Mormon in my geeky settings. Yet somehow a CTR ring never occurred to me. Probably because their ability to influence me to make correct decisions wore off about twenty years ago. And then it was just a small piece of jewelry that just wasn’t as cool as anything else I owned.

I forgot that the real power of a CTR ring is branding.

Since I exist in two subcultures that don't have a lot of overlap, I have to dig to find one in the other. And that’s where branding comes in. For the past few years, I’ve been trying to brand myself as a Geek when I am in Mormon environments. This seemed the best course of action since the most important attribute for my significant other is his faith and standing in the Church. However, despite my clever geeky shirts, necklaces made of resistors, and triforce earrings, I have yet to have a boy come up to me at Institute or another church activity and say “I see that you are a Geek. I am also a Geek, would you like a free meal?”2

As a joke, I even tried to combine my Mormonness and my Geekyness in the form of a charm that is attached to my purse. Behold! 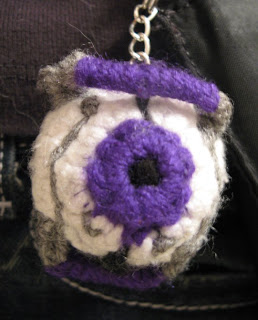 The only thing between you and a world full of deadly neurotoxin.

It’s the Morality Core from Portal! It declares my Geeky love for Portal, and my dedication to not flood the world with deadly neurotoxin! It's my geeky CTR ring! Unfortunately this joke is so obscure I didn't even get it until I explained it to myself. No one else has picked up on it without explanation. And we all know that the mark of a good joke is a lengthy explanation after the punch line. The explanation should be at least two to three times longer than the joke itself. Seriously, the longer the better. Then you know it’s really funny.

Honestly, I don’t know why I try so hard to brand myself as a Geek at church. Anyone that talks to me for more than thirty seconds will figure that out. I guess I’m just hoping that tagging myself will get geeks to talk to me without me having to ferret them out. Unfortunately, I forgot that Geeky men are terrified of all women, even ones who are apparently geeky.

So I’ve started to think that maybe I need to switch my strategy and wear something Mormon in a Geeky environment. But I somehow forgot about my CTR right. Probably because I don’t usually wear rings in my geeky environments. I’m a programmer, so a t-shirt and jeans is my uniform. And I’ve never seen a Mormon-themed t-shirt that I would actually not feel stupid wearing.3


Also, I’ve rarely noticed anyone wearing CTR rings outside of church. And using a CTR ring would probably work better if I was a man. Women tend to look at little things like rings. Men, not so much. Which is why sometimes engaged and married women get hit on. Men just don’t always think to look for *the* ring. However, when married men get hit on, it’s usually because they refuse to wear their wedding rings for some reason or another.4 Which sometimes gets me into trouble when I go to Geeky gatherings. I tend to go to these functions, not only too see what people are working on, but also to attempt to pick up men. This has never worked out for me, as of yet, because all the good ones are married.

So now that I’ve remembered my CTR ring, I’ll probably start wearing it to Geeky settings. It can’t hurt, and if anyone ever asks me what it means, I can just tell them it stands for “Companion, Tardis, Regeneration”, and that I’m a Time Lord.

1 CTR stand for “Choose the Right”2 Come on boys, is that so hard?3 A giant “CTR” or “I can’t. I’m Mormon” doesn’t make me feel very clever.4 Seriously, this is the very first thing I look for when I meet a new nerd man. Men, if you don’t wear your wedding ring, it is your fault that I am hitting on you.