As any true geek, I let my geekyness bleed into as many place in my life as I can. This includes my Christmas decorations. Or rather just my Christmas tree, because as a young-ish single woman, I don’t have a lot of motivation to decorate for Christmas. I mean, most years, I’m not even here. And my cats like to eat and knock over all my stuff, especially items new to their environment, so decorations are just asking for trouble.

But even with the feline danger, I just can’t resist a getting a tree. I just get a small tree, so the cats can’t climb it. They limit their destruction to knocking off the low hanging ornaments and drinking the water out of the stand.1

And as I said, I deck my tree with as many nerdy things as I can find. As long as I can find a way to attach them to my tree. I say things, because we don’t usually buy actual ornaments in my family. We buy other things, like keychains and the like, and then jerry-rig them into ornaments.2 But even so, I don't have a whole ton of ornaments. I should fix that.3 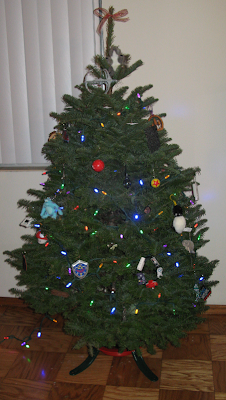 So here’s my tree, in all it’s glory! But you can’t see the awesomenss of each individual ornament, so we’re gonna do a run down of all the Geekiest ornmants on my tree. In no particular order.4 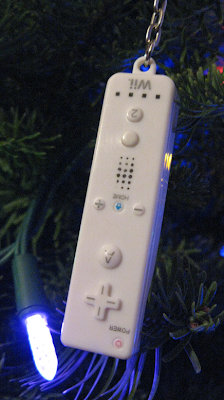 I don’t care what the Official Nintendo Docs say. It’s a Wiimote.

First up, is a Wiimote keychain that my very first team lead brought back from E3,5 or GDC,6 or something. I won it by rolling a D20 and getting the highest roll. So not only is it a geeky thing, from a geeky place, I got it in a pretty geeky manner as well. It’s like Triply Geeky! 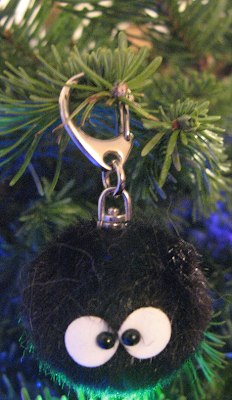 Don’t let anyone tell you that you can’t put keychains on your tree.

Next up is a soot sprite from the Miyazaki films. I’m going to say it’s from Spirited Away. Mostly cause that’s my favorite film of his. I got it in Akihabara on my trip to Japan. So that’s pretty nerdy. You’d think that traveling to Japan would seem like a bigger deal, but it turns out that you’re not really an Anime fan unless you’ve been to Japan. I’m not really joking. Just to go any anime convention. You’ll never find a larger collection of poor high school and college students who have managed to travel abroad a first world country. I have no idea how most of them afforded it. I only went after I had had a real job for over two years. 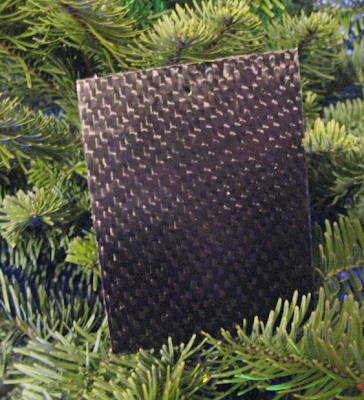 Major points if you know what this is, even if you don’t know why I’d put it on a tree.

Now, I don’t always buy my ornaments. Sometimes I make them. This wasn’t really intended to be an ornament, but when we were punching holes in our finished products, I realised that it would make a perfect ornament, so I punched my hole in the middle on top, instead of on a corner. So now that I told you all that, do you know what it is? That’s ok, it’s pretty random, really. It’s my test piece from my Carbon Fiber class that I took at Tech Shop.7 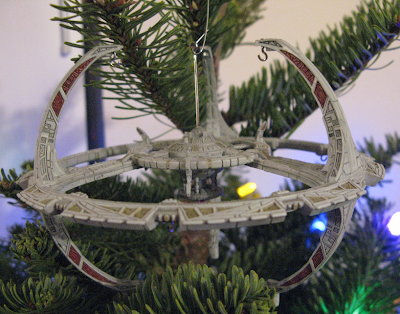 The largest, and realest ornament.

Now, not everything has a location or creation story. Sometimes I just buy geeky things. Like this DS9 ornament. Now, I can’t remember when,where or why I bought it, other than it was before 2001, and I love Star Trek. Maybe it was on sale, maybe a family member got it for me for Christmas. Maybe I got it for a family member for Christmas, cause it was something that I liked.8 Either way, it recently ended back up in my possession.9

The coolest part of the DS9 ornament, is that it came with three ships. Unfortunately, none of them are to scale. Either with each other, or the spacestation, but you can put them on the hooks at the top of the pylons, to simulate docking. I just put them on their own hooks, and placed them on my tree as separate pieces. I don’t have a ton of ornaments, so I need to space them out. 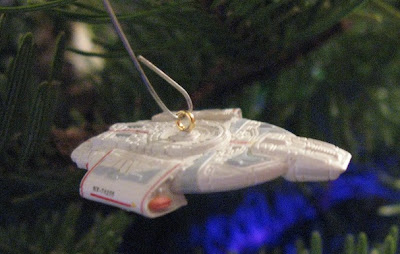 DS9 got so much cooler when they got this ship. 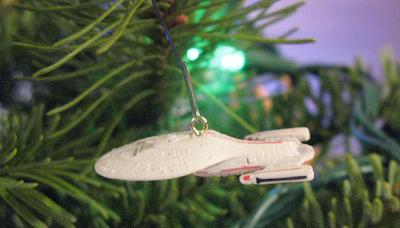 I should probably put Voyager on the back side of the tree or something,but then no one would see it to get the joke.

I don’t think I’ll ever get used to the Enterprise E...

I do love my Star Trek ornament fleet, but I’ve got plenty of other awesome things to show you. 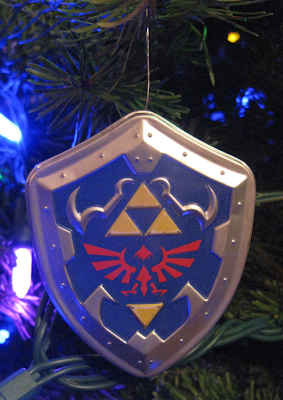 Anything can be an ornament. You just have to put it on a tree.
This was a mint tin. And it’s not the only one that ended up on my tree.

The Hero of Hyrul! Man, I love Zelda. And by love Zelda, I mean the Zelda games. Because I actually love Link. Cause I’m a girl. And not a lesbian. A friend of mine gave this to me as a part of the wrapping of my Christmas present one year. I immediately decided I needed to turn it into an ornament. 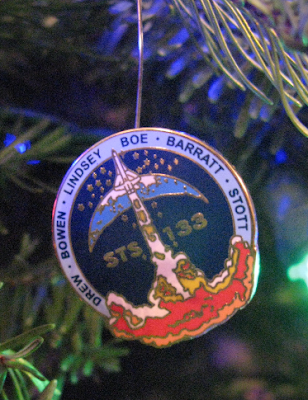 This is supposed to be a pin.

This is from when my parents and I went to the last shuttle launch of the Discovery space shuttle. It was a pretty amazing experience. Obviously, I’d seen the shuttles take off dozens of times on TV and in movies, etc, but when you see it yourself, it all becomes real. We see so many fantastical things on film these days, that I think it’s a bit hard to realise the magnitude of what you’re watching unless you see them in real life. I don’t think space travel was really real in my head until I saw that Shuttle take off. And now they’re all retired... At least I got to have a piece of that history when it was available to have. 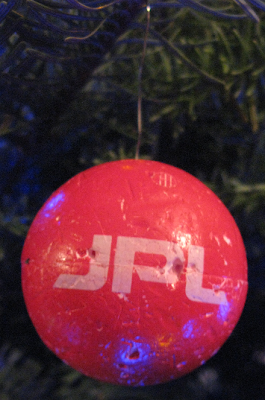 And this is a car antenna ball.

Speaking of NASA, I picked this up when I interned at JPL my first summer in College. It sounds a lot cooler than it was. I lived at an observatory, and I wrote a SQL database to interface with a program written in IRAF.10 I think the coolest part of that internship was being able to tell people for the rest of my life that I interned at NASA.

I bet you can’t guess what this is, or what it’s original purpose was.

So, speaking of space travel, do you know what this is? It’s the StarTours Vehicle! Now, I don’t know if Star Tours is still cool, because they changed it in the last year, and I haven’t been back to Disneyland since it’s changed, but it was my favorite ride when we went to Disneyworld in 2000. So when I went to Disneyland with my family last year, I had to pick up something that was star-tours based. Even though we only went on the ride once. If I’d realized that they were closing it, I’d have probably gone more. I’m terrified that they’ve put too much of the new movies in the updated version... And the new movies are terrible... Oh, and that’s a toy car type thing. It’s got wheels and crud. 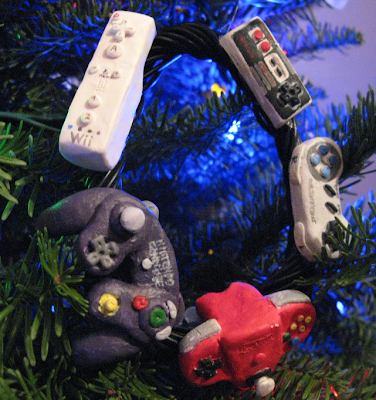 This is supposed to be an ornament. But I totally made it myself.

And finally, my masterpiece. I made this for an ornament contest at my first game studio job. I worked on it for like three days straight, and I was so proud. And then I was basically the only entry. So I practically won by default. Not that I really won anything. But I still think this is pretty epic. The N64 controller even has the Z button, you just can’t see it, cause it’s glued onto the wreath of controller wire.

So that’s my Geeky Christmas Tree! It's pretty Geeky, but it could be geekier. I should get some more ornaments, or souvenirs from cons or something. You can never have too geeky a tree. I just wish my cats would stop knocking stuff off. I don't like it when my ornaments make unscheduled travel plans...

Oh no! She’s entering Warp! Not so close to the tree! Think of the cats!

1 My cats like to drink water from anywhere other than their water dish, including, but not limited to, my water glass, the shower, watercolor water, and, of course, the Christmas Tree stand.2 You’ll notice that I have only one purchased ornament set in this whole article.3 I have nothing from Portal, Doctor Who, or any fan convention that I've attended. If those things are as important as I claim they are, they definitely should be represented on my tree!4 Seriously, how I’m supposed to rank-compare Star Wars to Star Trek, much less either of those to NASA?5 Electonics Entertainment Expo6 Game Develops Conference7 The most amazing place on Earth. Google it if you don’t believe me.8 We do this too often in my family. My Mom always gets my Dad things for Christmas that she wants for herself.9 Because I wanted to write this post, and I asked my parents to bring it with when they came to visit me recently.10 If you have even heard of this language, without googling it, I’m sorry.