Now I know this is old news1, but I it takes me forever to write up these articles, so just pretend it’s still the first week of Dec 2011. If you haven’t heard2, the Red Cross is making a stink about the fact that War Video Games are not enforcing the Geneva Convention against the players of these games. POWs can be shot without consequence, civilians can be tortured, personal property destroyed in search of Rupees. Basically, you can do things in these games that would land you in some sort of war tribunal if you tried to do them on a real battle field.

Now, of course the Internet has labeled this as Ridiculous, and the comments sections are ablaze with rebuttals like "pixels aren’t real", and "shouldn’t you be spending your time worrying about actual wars and war crimes?" But these are far too reasonable and rational arguments. I think that a completely ridiculous claim warrants an equally ridiculous response.

And so I say "Red Cross, you don’t even exist in video games, because that is what you wanted! So it’s you fault that there’s no one around to enforce the Geneova Convention! I mean Geneva.3"

Now I think there needs to be a bit of an explanation of how the Red Cross doesn’t exist in video games. I’m not talking about some alternate reality thing, or anything like that, I’m referring the debacle of about 5 years ago when Canadian Red Cross threw a fit and threatened to sue any new video game that used the actual symbol of the Red Cross for any purpose.

Now regardless of the legality of this claim, or the fact that video games had been using it for fifteen or twenty years without a peep from any branch of the red cross, or that the Canadian anything has no power over the rest of the world, video game companies took them seriously.

How do I know? Well, I used to make video games for a living. And when I did, I had the opportunity to work on the best selling classic Petz Vet4 for the GBA. Now, despite having been sold under the prestigious Petz animal games franchise, the GBA version was merely a translated version of a Japanese game called, actually, I have no idea, cause it was in Japanese. 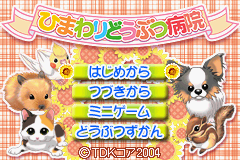 Now despite not having some crucial files needed for the completion of this game5, I was able to finish this project.6 At the end, the testers would always have a list of things that I had to put in the game, or take out, that weren’t even there in the first place, and I would proceed to tell them what I thought of them and their ridiculous rules that the original game didn’t have to follow, so why did I have to put this in now, it’s only three years later, so why do I need to put in these extra screens??7

So one day this tester, who name I don’t remember, but I actually kinda liked, came and told me that the other testing house said that the third and final unlockable outfit for the main character had red crosses on it, and we had to take them out. I was a little upset, because this was one of the missing art pieces, and it supposedly showed up in another section of art that I had not tackled yet, and I wasn’t looking to reconstructing and cramming art in yet another part of the game. So before I went into full panic mode, I decided to make sure that there really was a problem. So I used my mad programmer skillz and checked the tile banks8 on that screen, and I was able to prove that they were not, in fact, red crosses, but puppy paws. 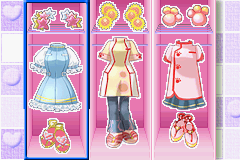 Now I tell this story not to highlight my mad programming prowess9, but to illustrate that Ubisoft would have been unwilling to publish a game in which the third unlockable outfit had red crosses on a pink uniform.10 This was a vet game, for kids, where you treated sick animals and made them feel better by playing innocuous minigames.11 And this was game was shovel-ware at it’s finest. I’m pretty sure the Japanese company sold their original version for $50 and a sandwich on their way out of business.12 And probably paid Sensory Sweep13 enough money to feed me pizza for the two months that I spent smashing English text in it with a hammer.14

Seriously, I think the 37 people that commented on this video are the only people who even bought and played this game. I doubt the red cross in Canada or New Zealand or anywhere would have noticed if this slipped through, or even minded for that matter. It’s a live-saving game! Not those mad-crazy shooters where you blow people’s head off. But Ubisoft wasn’t going to risk it. And if Ubisoft didn’t want to risk angering the red cross with too many cute, cared for pixel puppies, I think we can say that the Red Cross threatened themselves right out of all video games.

And I don’t know how you’re supposed to enforce a real treaty for real people in a virtual world, when you demanded that your life saving influence be removed from these video games. So Red Cross, it’s your fault that all those pixels are being harmed needlessly. If you had just let your symbols remain on those health packs, you could have argued that you exist in those video games, and that thusly your pixel counterpart had just as much obligation to enforce the treaty as you do for real people. But you can’t. Because the Canadian Red Cross whined you all out of existence.

1 i.e. it’s been longer than a week since it was on Kotaku.2 Or more likely forgot.3 That joke came from an honest to goodness typo.4 You know it’s awesome, cause of the ‘z’.5 Including, but not limited to half of the art, and all the assembly macro definition files.6 And I will totally tell that story, which is full of awesome, as long as Ubisoft promises not to sue me.7 I know it’s not their fault, but I’ve gotta get mad at someone for changing the rules. And I can’t yell at Nintendo with impunity. Sorry testers.8 Mad props if you know what a tile bank is.9 Although that is a bonus.10 You’d have to actually play this game for hours to find the unlockable...11 No, I don’t get it either.12 No matter how much we asked, we could never get support from the original developers, and as I said, we were missing some very crucial files.13 May it rest in pieces.14 That’s exactly what it felt like.