I love to dance. And by dance, I mean go clubbing. And by clubbing I mean, go to a club. By myself. And dance like a crazy person for about an hour. All the while hoping that everyone will just leave me alone.1 It might seem odd, but I believe this behavior stems from me being a Geeky Mormon Woman. Even though it’s not exactly Geeky, and not all Mormon.2

So why do I love something that isn’t exactly native to my demographic? And why would my non-applicable demographic be the source of my non-demographic behavior? Well, see, Mormons have this thing where they throw dances for the Youth3 as a way of getting the boys to interact with the girls in some sort of semi-appropriate manner.4 In High School, I was unfortunately too nerdy for the Mormons, and too Mormon for most of the nerds, so interactions with boys weren’t exactly plentiful. And these dances were no exception. Since I wasn’t getting asked to dance a lot, I would get bored. And when I get bored I look for something to do. And I was at a dance, so I figured I’d dance.5 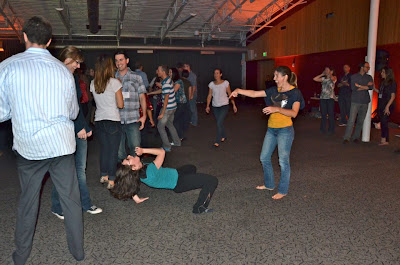 Fortunately for my dancing desires, there were a variety of songs played at these dances. They didn’t just play lame slow songs(the presence of which would sometimes force me to awkwardly ask boys to dance), they also played fast songs. Like YMCA and the Macarena6 as well as plenty of other 90s classics that I don’t know the names of.7 I really liked it when they played these songs, since you could dance by yourself, and thus avoid that whole awkward thing of dealing with boys. I’m never one to be content with mediocrity8, so I started experimenting with how to dance and how I could get my body to move in cool and different ways. And eventually, I got pretty good, and I got pretty confident. To the point that one of my good friends, who was actually a trained dancer, would often comment on how good I was.

So, If I was not a Mormon, there would not have been so many dances for me to go to,9 and if I wasn’t a geek, I wouldn’t be so awkward, and prone to experimentation. Thus the origin of my non-standard behavior.

This trend of going to dances and making up my own moves continued through college. But after college, I didn’t exactly feel like crashing college dances. I was all old and graduated with a real job making video games,10 so I didn’t feel like hanging out on campus anymore. But I still wanted to go dancing. So I decided to try out a *real* club. Cause that’s where adults go dancing, right? And I was an adult, right?11

But these clubs are full of people that are not Mormon, and even though I’m now in Silicon Valley, I don’t think most of them are Geeks either. And honestly, that’s just a real big turn off to me. I went clubbing with a Mormon girlfriend of mine recently, and she made a comment about seeing who could get more numbers,12 and my response was "what’s the point??" I mean, there were no Mormon boys at the club that I didn’t already know,13 and honestly, there aren’t a whole lot of guys that really look like my kind of Geek at these kind of clubs.14 So even if I just went on one random date with these guys that try and pick up on me at the club, I don’t think I’d really enjoy it. I probably shouldn’t admit it, but I’m kinda a nerd elitist...15 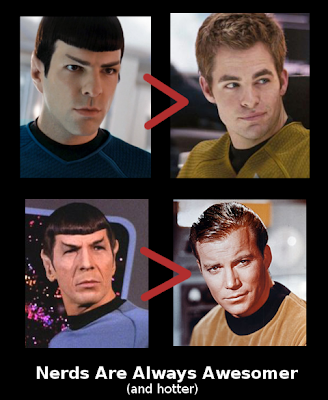 Even my examples of Nerd "superiority" are Nerdy.So Meta.

So when I dance, I try to just be as into it and crazy as possible. Cause people don’t bother that crazy person. They let them do whatever it is that crazy people do. And usually, people leave me alone. And when they don’t, it’s usually either to tell me that they think I’m good, or to try and get me to give them some level of physical contact that I’m really not interested in. I like the former, because complete strangers don’t usually stop you in the middle of what you’re doing to tell you a lie. I could really do with out the latter, though.16

But good dancer or not, all I really want to do at a club is have some fun. And by fun I mean dance. And by dance I mean actually move and do some neat moves. And that’s how this Geeky Mormon Woman hangs at a club.

1 Odd, I know. Normal people go to clubs with others, or in the hopes of meeting others. But I think we’ve established that I am far from normal...2 The Woman element I guess is applicable... Chicks go to clubs, right? I’m always too busy dancing to notice.3 What all members from 12 to 18 are called, though you pretty much get treated as a Youth until you are married, no matter how old you are.4 Cause you sure know they aren’t actually going to ask the girls on dates, even once they turn 16. They might figure out how to do this once they make it to college.5 Odd, I know. Most people choose to talk or hide in the hallways when they are bored. I’m a rebel like that. And my rebel I mean awkward nerd.6 The Macarena is cool. Ok, it was cool. Ok, it was stupid, but at least it got people dancing. But bow ties are still cool.7 I’m not all that great with names and artists. I was singing along to the radio in a store recently, and a girl asked me who the artist was, and I had *no* idea who the artist was, or even what the song was called...8 Are you really surprised?9 Like almost one a month during the school year10 Yes Grandma, that is a real job11 Sometimes I still have to remind myself of this...12 Just as a joke.13 They came with us...14 Maybe I’m being a bit pre-judgy, but I’ve gotten pretty good at spotting engineers. I think it’s their pasty skin, dark circles under their eyes and the carpel tunnel that gives them away.15 I’m working on it!16 Like completely do with out it. How are some men so handsy! And the handsy ones are ruining it for the ones that would be just content with dancing a little...