The Cake is a Pie

I case you couldn’t tell from my post, I kinda love cool dates.1 So it’s no surprise that I love to celebrate Pi Day. Back in Utah, this was a lot easier, because, my friend Kristine would usually take care of organizing an appropriate gathering for this blessed holiday. But then she got all married and pregnant and had a baby and I moved away,2 so if I wanted a Pi Day party, I was gonna have to do something about it myself.

Parties require planning. And Cooking. And Cleaning. I do not make as much time for these things as I should,3 but for Pi Day, I was willing to do it all! I even completely rearranged my living room and put my murphy bed away.4 But the big question was what pies to make? While I had many family pie recipes,5 I wanted a little more "nerd" to my Pi Day than just a selection of pies,6 even if they were really good pies. And then I was struck with a brilliant idea.

The Cake is a Pie 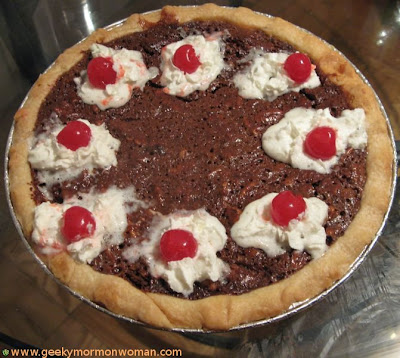 Do you get it? It’s from Portal.7 And if you remember, I kinda love portal.8 And I love really awesome puns.9 And this is a beyond awesome pun. Mostly because it’s about Portal. And Pi Day. And I came up with it myself. And the internet isn’t saturated with it yet.10


But what kind of pie is the cake? Well, we know from the almighty Cake Core that the cake is a chocolate cake with coconut pecan icing.11 So I googled "chocolate coconut pecan pie" and low and behold, that pie actually exists!12 I didn't have to make something up for once!13

But I was not satisfied with making merely one interpretation of this brilliant joke. No, this joke needed two pies. Or Pies, or Pi’s, or... what is the plural of Pi?14 As you might have noticed before, the phrase could be "The Cake is a Pie" or "The Cake is a Pi". The Pi was made using the directions from the Cake Core, and a bit of quick sculpting with a knife.

The Cake is a Pi 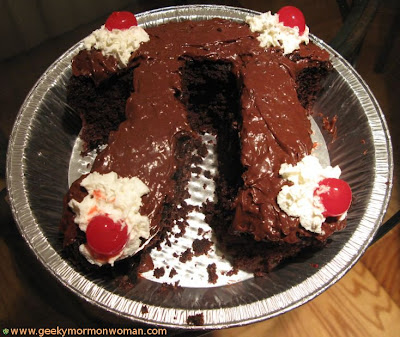 Does the pie tin also make it a pie?

Now I’m not sure which one is funnier, but the pie was tastier than the pi, or at least more appealing. Cause there was very little pie left, but quite a bit of pi left.15


As awesome as all of this was, I invited mostly Mormons16 to the Pi Party, and many of them were not-so nerdy. So whenever I had someone show up that I though might get the joke, I would drag them over to the table, and point expectedly at the pies, and say "Do you get it?!? Huh? Huh? Do you get it?!??" Most of the selected guests did, and I was happy. And I knew that even if not many people at my party got it, that I could share it with the internet, and that you would get it!17

1 Ok, I’m obsessed with them.2 It was actually the last one that really was the problem.3 Messing things up is always more fun than cleaning.4 Murphy beds are cool.5 Mostly taken from the 1970s version of The Joy Of Cooking.6 Yes, I felt the need to nerd up *Pi* day...are you really surprised?7 Cause you know, the Cake is a lie, but "lie" rhymes with "pie", and so the Cake could be a "pie" or a "pi", instead of a "lie", but that is a lie, cause the cake is really a cake, not Pie, or a Pi. See, I told you the best jokes were the ones you had to explain!8 As exhibited by previous posts, costumes, videos and furniture.9 Definition of an awesome pun: Megan thinks that it is cool. Definition of a stupid pun: All other puns that aren’t awesome.10 At least according to Google. If you search for "the cake is a pie", not all articles on the first page are even related to Portal. But they are mostly at least about cake, or pie.11 Garnished with fish shaped ethelbenzene.12 You should make one, they are good.13 I make up so much stuff when working on costumes...14 I don’t care that there is only one Pi in the universe, I should be able to pluralize it! English, don’t fail me now!!15 My guests did tell me they didn’t want to eat the Pi, because it looked like I spent so much time on it, but honestly, it really doesn’t take a lot of time to cut a cake into a pi.16 Ok, pretty much all Mormons17 And hopefully even think it’s funny! You do think it’s funny, right?18 Did you get it??!