So you’ve got a pattern, but you don’t know what to do with it. Might I suggest making a companion cube. 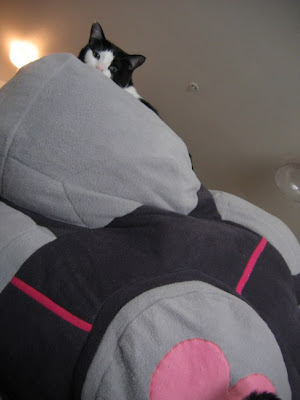 Also known as the most awesome cat bed evar.

Oh, right, that’s why you’re here. Well, first step would be to procure some fabric.1 I used polar fleece from Joann’s and a local store in Utah. You could use polar fleece, or minky, or felt, depending on the look and feel your want for you cube. Now you probably want to me to tell you the yardage that you’ll need. Unfortunately, I finished the cube a while ago, and I am unsure of my exact yardage, so I am going to attempt to over estimate. I ran out of light grey fabric, and in that time, Joann’s stopped carrying that particular color of polar fleece.2 I would suggest getting 5 yards of light grey and 2.5 yards of dark grey. You should only need about half a yard for the pink hearts, and just about a quarter of a yard of the dark pink for the lines. No, I did not use the same fabric for both pinks... 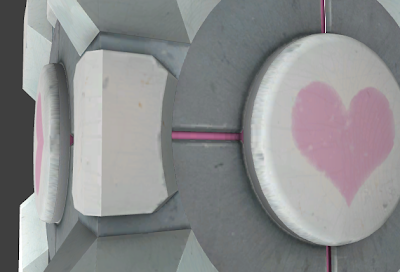 Do those look like the same color to you?!

If you want your cube to be a bit stiffer and hold it’s shape better, I recommend backing all the the pieces with craft fuse. You can find this in the interfacing section of your local craft store. As long as your local craft store is called “Joann’s”. But I'm sure other places carry it. It's basically just a thick interfacing.3 I would strongly recommend a fuseable interfacing. The craft fuse isn’t going to make your cube stand up on it’s own. However, it will give it more structure where there was none before. It will also help keep the fabric from stretching out.

Now get out the dvds, or netflix, or whatever because you are about to spend the next year cutting out 700+ odd shapes. You will get bored. Try and push through it, cause this is where I kept getting stuck. I made all the patterns quite quickly, and sewing them together took time, but I was able to make steady progress. Cutting out all those pieces seriously felt like it took forever, and it just wasn’t enjoyable. Maybe make a party of it, like when you get your guildies to come and kill a monster with you. Cause this cube is one major monster, and if you’re not careful, you will grind yourself right out of not actually finishing this project. But I believe in you! And no, I won’t cut them out for you. 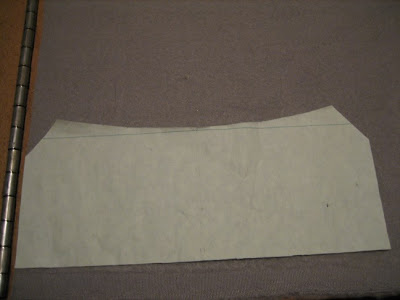 I wish I could write a function to do this for me...

Now when you cut the fabric, you should definitely cut the pattern pieces with seam allowance. When you cut the craft fuse, you could cut the smaller, original sized piece. This will keep your seams cleaner, and it’s what I did with my cube. However, if I was doing it again, I would interface the whole piece. Which goes against everything I stand for as a seamstress, but this is a piece of furniture, or a large toy, not a garment, so I think it’s ok. Just don’t tell anyone, and they might not take away my sewing licence.4

Ok, I’m going to climb into my TARDIS here and meet you in six months, cause I just can’t wait around while you cut out all those pieces... 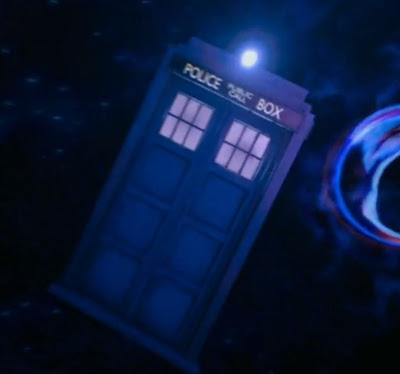 My other vehicle is a Honda Accord.

Ok, I’m back! Are you done yet? Awesome! I knew you could do it!

Now we have to sew up all those pieces. I sewed each section in turn. First I sewed up the corners. 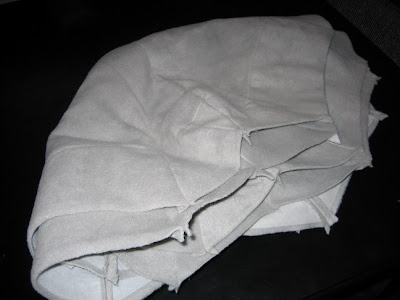 A stack of corners. Or maybe a bit of folded space.

Then I sewed up the edges. And the dark grey channels. 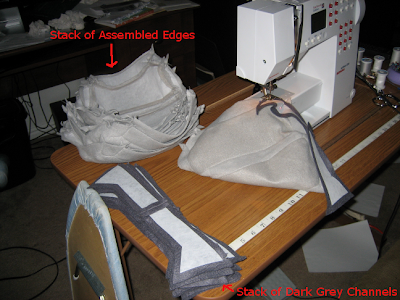 Here I’m sewing the channels onto the edges. These pictures are a little timey-wimey.

Then I sewed up the buttons, with the face and stripes. 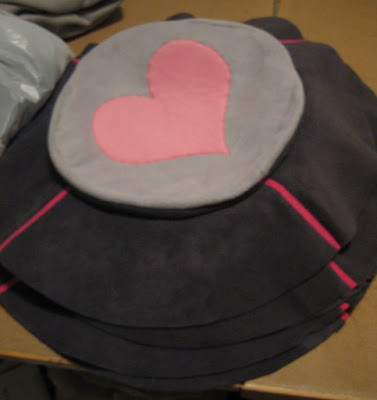 A companion cube has six hearts, which means he loves you three time more than the Doctor can.Also he’s three times harder to kill. Minus regeneration.

And finally, I sewed up the dark grey channels to the edges, and the edges to the corners, and the face to the ring of corners and edges. I finally had a full side. 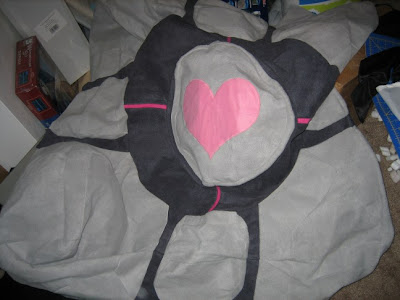 Objects when assembled will be larger than their separate parts appeared.

And this is when I realize exactly how big the cube was, and I wondered what I had just gotten myself into...

But it was too late to turn back. I continued added onto this face, with corners and edges and centers. The centers always went in last. Also, I made sure that the hearts were facing the right way according to the cube model. Also, don’t forget to install a zipper somewhere. I originally just hand-sewed the cube up, but on the second go around, I installed a zipper.5 I did a dark grey invisible zipper, and I put it on the edge between a button and the face. This would be easy to insert when you are constructing a center. I think this is a great place for it, as it’s a long enough seam to take a 22” zipper, and it’s also a pretty hidden place. You can’t see the zipper unless you know it’s there, so I routinely forget where it is. Which is good and bad. 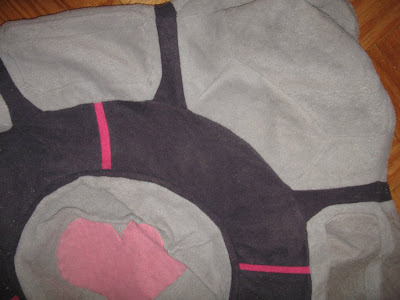 Can you spot the zipper??

For my first go around, I also made some stabilization inserts for the corners. I initially made these out of some extra felt I had, but any material will do, as long as it’s stable, ie. it won’t stretch much. I would not recommend polar fleece for these. These were sew into the seam allowance of the complete cube corners on the completed cube. This helps the corners maintain their shape, and helps the cube maintain an overall more cube shape. 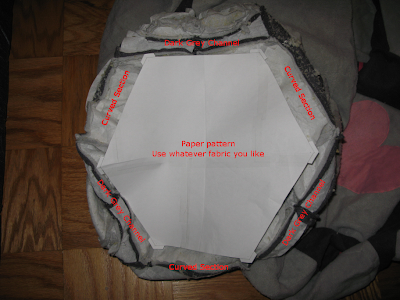 Just sew the tabs into the seam allowance of the corners.

I then stuffed the cube will all manner of foam, and foam-like objects. The majority of what I used what was knock-off lovesac filler. When using this kind of material, always, always, ALWAYS, put it in a bag of some sort. I am still picking this stuff off of my cube since I unstuffed it, and I will never fully get it out of the inside of the cube, no matter how long I, or the cube, live. I also used normal poly-fill for the corners, and I used bean bag pellets to finish it off, because my love sac foam just wasn’t enough, and I was on a time crunch at that point, and this is what I could get a hold of. 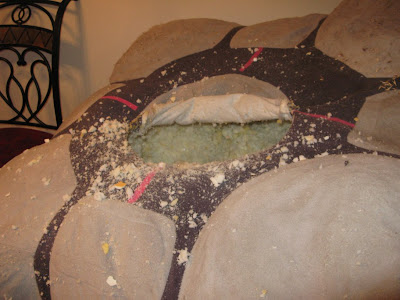 Now all this made for a very heavy cube. When we were dragging it around for the video, we were using two furniture dollies and a piece of plywood. And it was still hard. When I was trying to push the cube, I didn’t have to act like it was hard. It was that hard.

But after the video6, I really wanted to take the cube with me to a convention. I thought of trying to have a collapsible structure made of foam and pvc pipes, but my cosplay friend Hylian Jean suggested that I buy a large inflatable cube. Instead of buying one, I just made one out of painter’s plastic and a valve from a broken air mattress. It’s not perfect. It still loses air somehow, and I haven’t found the leak, despite my best efforts. I hope to correct this in the near future. I would only recommend a plastic inside when making a portable cube. The Luv Sac foam is actually a great filler, as long as you plan on moving it about as much as you move a Luv Sac. 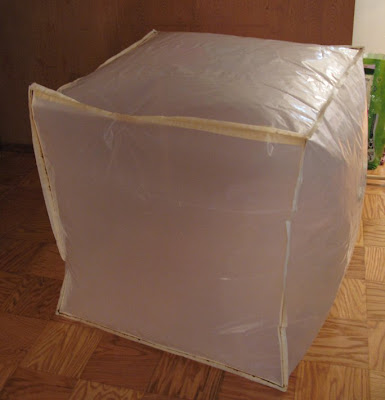 If it only stayed this inflated.

But there you have it! In just about a million hours, you will have your own cube! You’d better get started. Time waits for no one! And at the end, a cake appears! 7 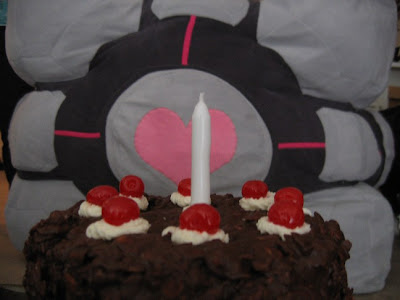 Cube and Cake, together at last!

1 Unless you just want to make your cube out of printer paper and tape. ProTip: fabric is much, much cuddlier than paper.2 ProTip: Buy enough fabric, so you don’t have to try and color match later, cause that is pretty much impossible. I don’t want to admit the about of money and hours I have poured into attempting to do just that.3 If you don’t know what interfacing is... you might want to wiki that...4 I could try and explain why you shouldn’t have interfacing in a seam, but honestly it really doesn’t matter, and I’m probably making too big a deal over this... IGNORE ME!!5 ProTip: Just do this the first time.6 Same link, but you should probably watch it again. And tell your friends to watch it.7 As long as you have a super awesome friend who promises to make a cake for you when you finish your cube and throw a party.